The Story of a Mural

The following article will appear in the forthcoming issue of HIBBLETON Independent magazine.

Although it is called “Pastoral California,” the 75-foot long fresco mural on the side of Plummer Auditorium at Fullerton Union High School tells a story that is anything but peaceful. It was painted in 1934, during the Great Depression, painted over by order of the Board of Trustees in 1939, and restored 56 years later in 1997. The story of this mural, what it depicts, why it was painted over, and finally restored, is a story of conflict, racism, oppression, and the evolving social values of a community.

The first major public art projects in Fullerton were commissioned during the Great Depression by the Works Progress Administration, which was created by Franklin D. Roosevelt to put America to work at a time when lots of people needed jobs. The WPA gave over eight million unemployed Americans jobs in its eight-year existence. The City of Fullerton benefitted tremendously from the WPA. Many of the buildings at Fullerton College are WPA buildngs. The post office, the Fullerton Museum Center, the Police Station, and the stone structures and paths in Hillcrest Park were all built by WPA money and unemployed Fullerton residents.

In addition to building projects, the WPA also commissioned murals in cities across America, including Fullerton, in an effort to give people not just jobs, but a sense of hope and beauty in difficult times. Perhaps the most famous of these murals is “Pastoral California,” one of the two largest frescoes commissioned by the WPA.

Charles Kassler, who had studied art at Princeton, traveled extensively, and apprenticed under a fresco painter in France, completed “Pastoral California” in 1934. Kassler had only one hand. He’d lost the other in a high school chemistry accident. He was married to famous Mexican singer Luisa Espinel, who was the aunt of pop superstar Linda Ronstadt.

Kassler clearly did local history research before painting the mural. It depicts a Spanish/Mexican southern California. From the 1700s to 1821, California was controlled by Spain. From 1821 to 1848, it was controlled by Mexico. Around that time, the United States decided it was their “Manifest Destiny” to control California, which they have done quite successfully to this day. Kassler, however, chose to depict not an Anglo-American California, but a Spanish/Mexican one.

The mural depicts historical figures like Jose Antonio Yorba, a large landowner whom Yorba Linda is named after. In the background is Mission San Juan Capistrano. To the right is Pio Pico, the last Mexican governor of California. Most of the figures are Latinos doing everyday activities: washing clothes, riding horses, eating together. 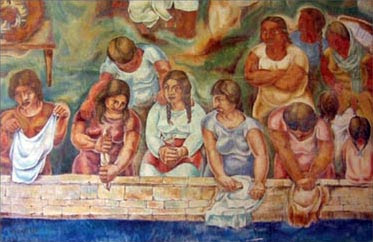 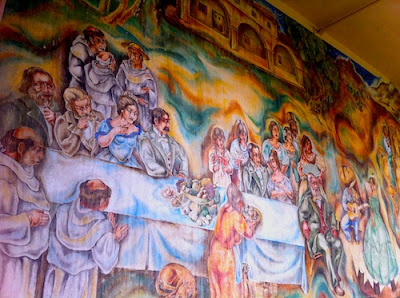 1930s LA art critic Merle Armitage praised the mural: “Kassler has adhered not only to the beautiful traditions of pastoral California, but at the same time has also borne in mind the splendid Spanish architecture, and, lastly, created a beautiful fresco of amazing vitality and freshness of viewpoint.” 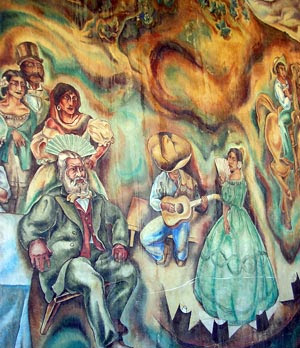 Dr. H. Lynn Sheller taught English and History at Fullerton College in 1934, at the time “Pastoral California” was painted. “I watched him [Charles Kassler] put the mural up there,” Sheller recalled in an interview for the Fullerton College Oral History Program, “I would visit him day after day as he was working...the feature of a fresco is that the paint is mixed in with the plaster, thus it is supposed to be permanent.” 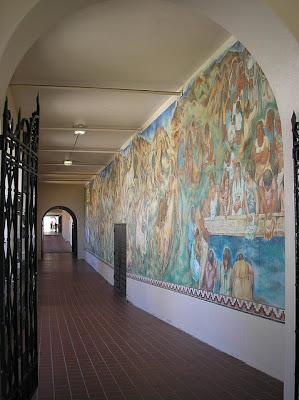 But not everyone was happy with Kassler’s mural.

An article from August 30, 1939 in the Fullerton News-Tribune entitled “High School Mural Doomed; Paint it Out, Trustees Order” reads:

"Fullerton Union high school’s much discussed and criticized mural which covers the outside west wall of the auditorium received its death sentence at the hands of district trustees last night who ordered the wall paint sprayed to cover the painting.

This mural is approximately 75 feet long by 15 feet high with its huge figures of horses and riders and other human forms depicting early California days has been a mooted point since its completion several [five] years ago by the artist Kassler as a federal art project.

Most occupants of the high school will shed no tears over the decision of the board; it was indicated today as the lurid colors and somewhat grotesque figures have apparently failed to capture popular fancy.” 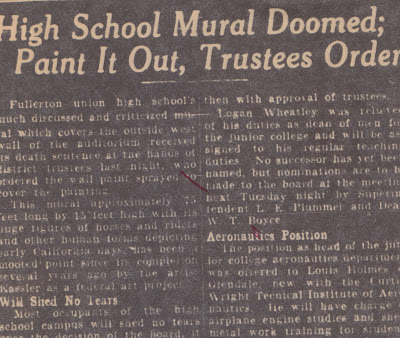 C. Stanley Chapman, son of Fullerton’s first mayor, Charles C. Chapman, and a city council man himself, was one of the ones who “shed no tears.” In an interview for the Cal State Fullerton Oral History Program, Chapman said: “The [mural] down there at the school was almost as absurd [as the one in the post office]. They were painted by that WPA business and the painting did not go with the architecture of the school. It was a great relief when they did paint them out. They were not an artistic addition to the building by any means”

The college student interviewing Chapman replied that superintendent Louis Plummer disagreed with this assessment: “Mr. Plummer seemed to think they were nice although he did not say so. He simply quoted a long article from the Los Angeles Times art critic who said they were lovely and truly representative and that the colors were beautiful. Mr. Plummer ends that little discourse by saying, ‘and they were painted over,’ as though he was disappointed.”

Chapman repied, “Oh, yes, the colors were good. But I have forgotten what the theme was.”

The interviewer reminded him, “Mexican entertainment; with the horses, and the children playing.”

Chapman replied, “Oh, yes, Well, the colors were nice. I don’t know. I was never involved in the school board or anything like that.”

So, what was the problem with the murals? Was it the colors? The subject matter? The decision to paint over this mural probably had to do with its subject matter. It celebrated Mexican culture at a time of great racism against Mexicans, and when Mexicans were being forcefully and illegally deported back to Mexico, because white people needed their jobs, during the Great Depression. This historical reality is described at length in the book Decade of Betrayal: Mexican Repatriation in the 1930s by Francisco E. Balderrama and Raymond Rodriguez. 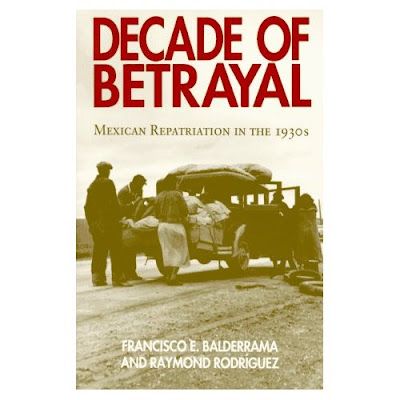 If C. Stanley Chapman did not like “Pastoral California,” what kind of art did he like? Inside the Chapman Theater (which became the Fox Theater), there used to be murals that were painted over when a new company took over the theater. Unlike “Pastoral California,” Chapman lamented the whitewashing of these murals: “On the walls—and I’ve often just about cried about this—on each side, there were these great big arches, and on each side a set of beautiful murals depicting early California, Portola’s landing and all that.”

Gaspar de Portola was the soldier sent by Spain in the 1700s to colonize California. It was he who began the long process of taking the land from Native Californians and forcing people into missions. He was white. The Native Californians were not. Chapman liked these murals, perhaps because they celebrated an aspect of history he agreed with.

Interestingly, the mission system, while defunct by the 20th century, was very similar to the system the Chapmans used with their Mexican workers. He said, “On our ranch, we had our own housing for them.” In the 1930s, Mexican laborers lived in “citrus towns” that were segregated from the dominant white community. This historical reality is described at length in the book Labor and Community: Mexican Citrus Worker Villages in a Southern California County 1900-1950 by Gilbert Gonzalez. 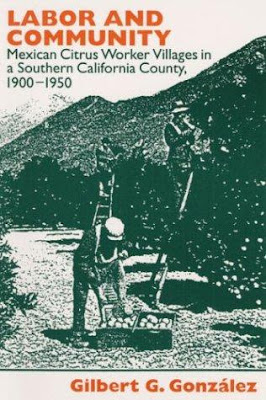 It was the subject matter of the mural that caused High School Trustees to vote to paint over the mural in 1939. “It wasn’t until we had a group of trustees in here who were negatively inclined, that it was painted over,” Sheller remembers. When asked why it was painted over, Sheller said, “Some people felt it was vulgar or gross in some way. It simply showed the Mexican women as they were probably attired at that time. They were very bosomy women. I don’t think that we would feel that there was anything wrong with it. I never felt there was.”

Reflecting upon the incident, Sheller told the interviewer, “The whole story of that Board of Trustees really ought to be told sometime, but it’s the kind of story you don’t ordinarily tell, I guess. Plummer didn’t include it in his history; he was too much of a gentleman.”

Another WPA mural “The History of California” was painted in Fulleton in 1942 by “post-surealist” artist Helen Lundberg. It is located at the former City Hall (now the Fullerton Police Station). Like "Pastoral Calfornia," it was also painted over, this time by the Fullerton Police Department, when they took over the station in 1963. This mural depicts Anglos and Mexicans seeming to work together to develop California. 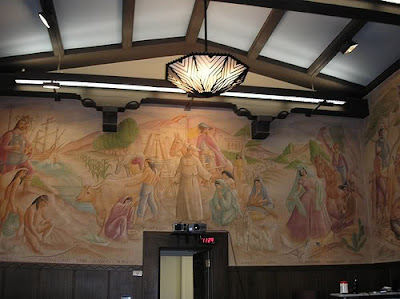 “The History of California” was restored in 1993, at a cost of over $80,000. When I read about this mural in Bob Ziebell’s Fullerton: A Pictorial History, I thought: Why have I never seen it before? Here’s why. The mural is located inside the Fullerton police station, in a room not open to the public except by appointment. After reading about it, I eagerly walked over to the police station, to check it out. As I approached the entrance, I noticed a door was ajar, and I peaked inside. There was the mural! But it was half-covered by an obnoxious screen with traffic information on it, and a husky man in a polo shirt told me to leave and make an appointment and closed the door behind me. When I tried to make an appointment, the woman in charge said, due to renovation, that room will be closed for another week. Hopefully that “renovation” doesn’t include painting over the mural again.

There are other famous (and equally controversial) murals in Fullerton, located at the Lemon underpass, near Valencia. By “controversial” I mean they celebrate Mexican culture. I guess, in Fullerton, that counts as controversial. These murals, including the famous “The Town I Live In” mural, all deal with Mexican American identity. They were painted by the celebrated Chicano artist Emigdio Vasquez in the 1970s. 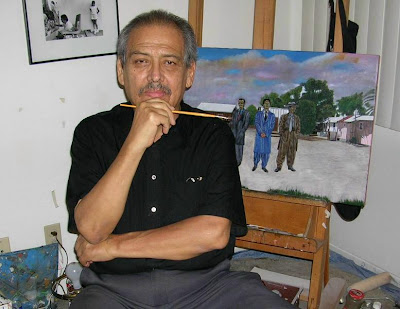 As recently as 2008, City Council was once again discussing painting over these public murals. Shawn Nelson, former City Councilman and current Orange County Supervisor, was quoted as saying, regarding these murals "we need to get rid of that crap, like, right now." In a snarky reply, OC Weekly editor Gustavo Arellano replied, “Like, you think the Virgin of Guadalupe is crap, Shawn? Like, no way!”

“Pastoral California” remained painted over for 56 years until, in 1997 it was restored, thanks to a massive community effort. I was actually attending Fullerton High School at the time. Some of my friends, art students, helped with the restoration. I remember thinking, even then: Why would anyone have painted over something so beautiful? Now I understand. In celebrating a “minority” culture, Kassler’s mural challenged the social values of his time. Art has this power. Times have changed, society has changed, and the decision to restore the mural is a testament to an evolving social consciousness in the Fullerton community.
Posted by Bookmachine at 6:47 PM