The Cinema of Mali and Tunisia @ Hibbleton Gallery

For over two years now, my friend Steve Elkins (award-winning filmmaker) has curated a monthly film series at Hibbleton Gallery, which I co-own.  We've explored the films of numerous great directors and regions, and our lineup for January 2016 is no different.  Having presented films from Senegal and Morocco in recent years, award-winning filmmaker Steve Elkins has curated another month of African cinema at Hibbleton Gallery for the month of January, this time focusing on the the cinema of Mali and Tunisia. All screenings begin at 8pm and are FREE!  Here's our lineup for this month:

January 4: “YEELEN” (Mali, 1987).  Our introduction to the cinema of Mali begins with Souleymane Cissé’s “Yeelen” (“Brightness”), a Bambara and Fula language film which depicts the rise, fall and subsequent rebirth of the cosmos according to the Bambara people’s belief in time as circular, not linear, always returning to that initial “brightness” which creates the world. The Komo is divine knowledge. It is taught by “signs.” It covers all forms of knowledge and life. The Kore is the 7th and final Bambara initiation society. Its symbol is the holy vulture, bird of space and knowledge. Its scepter is a carved board called Kore wing. Kolonkalanni, a magic pylon, is used to find lost things. The Kore wing and the magic pylon have been used in Mali for centuries, and in “Yeelen" they are instruments in a magic war involving ancestral animal spirits and the African elements themselves: heat, fire, and light. 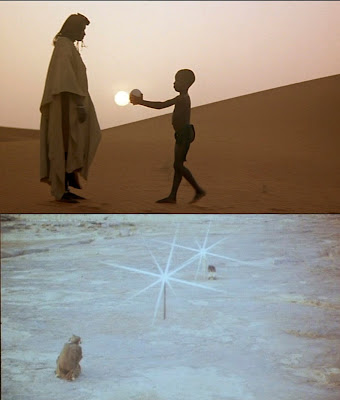 January 11: "WANDERERS OF THE DESERT" (Tunisia, 1986).  When a teacher arrives for a position at an isolated Tunisian desert village, mysterious events begin to unfold: legendary figures materialize out of the village well and the desert itself; groups of children hurry through a labyrinth of underground corridors; villagers gather around a ship that has mysteriously washed up in the desert sand; children construct a garden of the sky; and the young men of the village disappear one by one and never return. In this first film of Nacer Khemir’s Desert Trilogy, thousands of years of legend and tradition confront modern education. A nomadic Tuareg proverb says: "There are lands that are full of water for the well-being of the body, and lands that are full of sand for the well-being of the soul.” Khemir feels that “the desert is a literary field and a field of abstraction at the same time. It is one of the rare places where the infinitely small, that is a speck of sand, and the infinitely big, that is billions of specks of sand, meet. It is also a place where one can have a true sense of the Universe and of its scale. The desert also evokes the Arabic language, which bears the memory of its origins. In every Arabic word, there is a bit of flowing sand.” 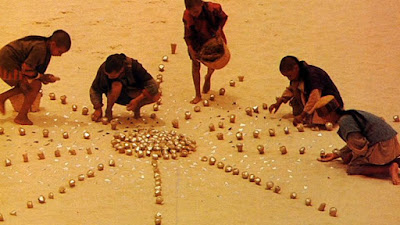 January 18: “GUIMBA, THE TYRANT” (Mali, 1995). In this visually stunning work of magical realism, a civil war erupts between sorcerers in pre-colonial Mali. The story is told through the village griot, the ancient prototype of modern rap artists, who became societal leaders in West African communities by embodying the sacred repository of their oral culture. Made only a few years after the film’s writer and director Cheick Oumar Sissoko was active in the underground movement that overthrew Mali’s dictator Moussa Traore in 1991, Sissoko notes that in Guimba he adapted to film two traditional Malian types of discourse used to "speak truth to power:" kotéba, a popular form of satiric street theatre, and baro, a virtuoso kind of public oratory. 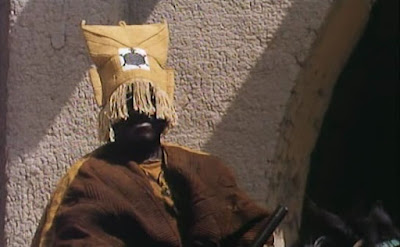 January 25: "BAB’AZIZ, THE PRINCE WHO CONTEMPLATED HIS SOUL" (Tunisia, 2005)
In this final part of Nacer Khemir’s Desert Trilogy, a blind dervish and his granddaughter wander the desert in search of a great reunion of dervishes that takes place just once every thirty years. Khemir, who believes that Sufism is the pulsating heart and full flower of Islam, made this film as "a modest effort to give Islam its real image back.” Sufism stands against all forms of fanaticism, asserting "There are as many ways to God as the number of human beings on earth,” and historically led to some of the greatest outpourings of art, science, and religious / political tolerance in human history. In the Islamic world, it is a duty to see and appreciate and create beauty, as part of one’s connection to God, which for the dervish includes whirling as all the atoms of the cosmos are dancing, until "I no longer visit the mosque or the temple, I am a servant of Love." 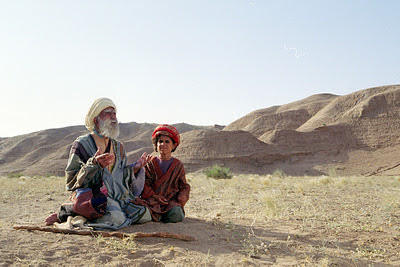 Posted by Bookmachine at 6:09 PM