The following is an excerpt from a work-in-progress called The Town I Live In: A History of Fullerton.

Herman Hiltscher graduated from Fullerton Union High School in 1919. His father owned a successful butcher shop in town. He went on to become the City Administrator of Fullerton for many years. In an interview for the Cal State Fullerton Oral History Program in 1968, he described the make-up of early Fullerton as “a city of mostly agriculture—we had the revenue from the oil in the hills—and churches…a city of fine homes and good schools and good residential areas; a good place to raise your family with many fine churches.”

It is ironic, however, that while Fullerton was “a city of fine houses” it was also home to “citrus towns” of bunkhouses and shanties that housed the immigrant labor, on whose backs relied the great success of the citrus industry. As a policy, these workers were generally kept separate from the dominant/white community.

When asked by interviewer Beverly Schmidt, “Do you remember the Ranch school for the Mexican workers that was up on the Bastanchury Ranch in the late 1920s and early 1930s?” Hiltscher replied:

“Oh yes. It was over here on Euclid, a little this side of where the Rider’s area is. There was a big Mexican camp there and they worked on the ranch. That was what threw us off. In 1930, we had 10,882 people and in 1940 we had 10,300 and something; and we finally found out that the reason for the population loss was because we lost the workers up there.”

What had happened was that, during the Great Depression, thousands of Mexican-Americans were illegally deported back to Mexico, to make room for white people who needed jobs, and were desperate enough to work the fields. This phenomenon was not limited to Fullerton, and is described in great detail by the book Decade of Betrayal by Francisco E. Balderrama and Raymond Rodriguez.

When asked “Were these Mexican laborers American citizens?” Hiltscher replied, “I don’t know whether they were or not. I don’t think we had wet-backs then.”

Incidentally, Herman Histscher, like many leading citizens at the time, was a member of the Ku Klux Klan in Fullerton in the 1920s. You can read about that HERE. 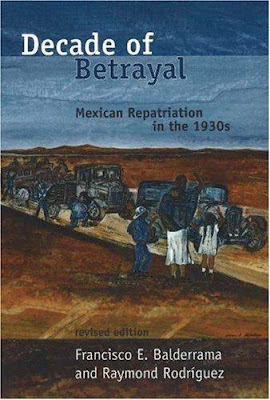