The following is from a work-in-progress called An American History. It's a novel.

Access to a bona fide time machine was an awesome responsibility. If my early forays into the past taught me anything, it was that I needed to do more research. It turns out that my public education about American history in general, and local history in particular, had not at all prepared me for the strange and disturbing realities I would find in the real past.

Visiting the actual Mission San Juan Capistrano circa 1810 was a traumatic experience, to say the least. Contrary to the idyllic story I’d been told in 4th grade, the actual historical reality was a fucking nightmare—Native peoples enslaved, women raped by soldiers, people in stocks, whippings, death in alarming numbers. I had not known that, I said to myself, conveniently exiting that reality by pressing the contraption on my wrist.

Clearly I required a deeper knowledge of local history, if for no other reason than self-preservation.

So I began frequenting the “special collections” section of the Cal State Fullerton Library, which was a goldmine of new knowledge. It was here, reading oral histories of local residents, that I discovered such horrors as an active Ku Klux Klan in Orange County in the 1920s. Being a white male, I would have a natural protection against such horrors, but my 21st century ideas about equality and social justice could, in some instances, prove to be a liability.

One afternoon, while perusing the “special collections” I made an astonishing discovery. In the 1960s and 70s there was an English professor at CSUF named Willis McNelly, who was instrumental in creating the first college courses in the country that studied science fiction as serious literature. Prior to this, sci-fi was relegated to the low-brow world of pulp magazines. Professor McNelly had befriended such sci-fi greats as Frank Herbert, Harry Harrington, and Philip K. Dick.

Professor McNelly saw, before many of his contemporaries, that certain science fiction authors were using the tools of modern, space-age science and technology to explore the same age-old human themes as Homer, Dante, Shakespeare, and Twain. He was a pioneer.

Among his many contributions, Professor McNelly arranged for the lodging of Philip K. Dick in Fullerton in the early 1970s, after Dick fled from Berkeley, convinced that the government was after him.

The great Philip K. Dick, one of my idols, actually lived in Fullerton and wrote some of his greatest novels while living on Quartz Lane: Flow My Tears, The Policeman Said, A Scanner Darkly, and (my favorite) VALIS.

McNelly and Dick were friends. Sometimes, the conservatively-dressed professor (who was related to Senator Joseph McCarthy) would allow the weird, bearded, paranoid, Phil to lecture at CSUF in the 1970s.

It was because of his respect for and friendship with these weirdo sci-fi authors that McNelly convinced PDK, Frank Herbert, and others to gift their manuscripts and personal papers to the CSUF Library special collections.

And that is where I made my amazing discovery, sitting alone in the fluorescent-lit special collections room on the third floor of the CSUF Library, casually browsing the personal letters and manuscripts of Herbert and Dick that I noticed, handwritten in the margins of occasional papers, the letters printed on the time machine in the basement of the library:

Pouring over their papers, reading the handwritten notes in the margins, I would learn that both Frank Herbert and Philip K. Dick had used the time machine. Herbert had traveled to the distant future, which gave him the knowledge to write Dune. PKD, perhaps due to his highly-drugged state and borderline schizophrenia, had actually travelled to other dimensions—one of which he described in great detail in A Scanner Darkly.

These were not mere science fiction writers. They were temporal inter-dimensional travelers. 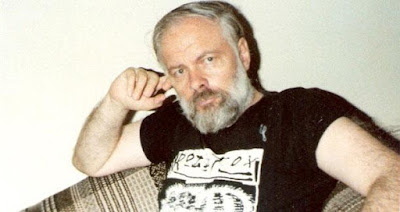